HLM Proops
An aspiring writer, currently living in the windswept Outer Hebrides with his wife, daughter and Europe's stupidest greyhound.

The Man Who Would Be King of the Monsters

It's been a ridiculously long time since I've updated this blog...
Life gets in the way. I'm still writing in my spare time, just there isn't so much of it these days. I am kept very busy with my two jobs and two kids. I'm now dipping my toe into academia and that is taking up more and more of my time. Interestingly, I don't mind. I don't resent having less time to write. I enjoy it when I get the opportunity and, generally, I am pleased with myself when I actually finish a piece of writing.
"The Man Who Would Be King of the Monsters" is my most recently published work. The germ of the idea arrived in late 2013 when I was studying my Masters degree. An evening at my uncle and aunt's house concluded with my first viewing of John Huston's wonderful adaptation of "The Man Who Would Be King" starring Michael Caine and Sean Connery. I then picked up a copy of Rudyard Kipling's novella and started thinking about the possibilities of a ridiculous mash-up story, one where the Peachey Carnehan and Daniel Dravot find themselves up against Godzilla, the King of the Monsters. As a break from writing my dissertation, I played around with the ideas, not really putting pen to paper but just thinking about how it could work. I ended up moving away from using Godzilla, and instead settled on some non-specific kaiju monsters. I always loved the sequence in Peter Jackson's "Lord of the Rings: The Return of the King" where the bad guys are riding on the back of Mumakil, giant war-elephants. I started thinking about how cool it would be to have a howdah on the back of a giant monster, those in the howdah kitted out with Martini-Henry rifles like the heroes of "Zulu".
Once the ideas took shape, it was then a case of embarking on some research (my favourite part of the writing process!). I spent some time gathering a glossary of words gleaned from online Pashto dictionaries and watched as many Kaiju movies as humanly possible. Of course, the 1954 original "Godzilla" is a remarkable piece of cinema, but I also quite enjoyed Gareth Edwards' recent 2014 re-imagining and 1962's wonderfully silly "King Kong versus Godzilla". I finally started writing in the autumn of 2014 and the first draft of the story was finished within a few weeks. It was a slow, but remarkably easy birth. It was just then a case of finding a home for it.
I was thrilled when I received the email from editor Dion Winton-Polak that "The Man Who Would Be King of the Monsters" anthology "This Twisted Earth". In order to get the story to fit with the reality-twisting shared-world setting, some minor edits were needed to the story. We moved away from using the original names and locations of Kipling's story and went for fictional (but similar) ones. I normally find the editing process hard-going, standing by helplessly whilst someone takes a pen (or sometimes a scalpel) to your work. However, working with Dion wasn't at all like this. The editing process was collaborative and very easy. Emails flew back and forth for a few days and it was done.
"This Twisted Earth" is a great collection and I'm proud to be a part of it. I was especially thrilled when I learned that my daft little story about giant monsters was going into print alongside stories by Adrian Tchaikovsky (Arthur C. Clarke award winner) and Jess Nevins (the author of "The Encyclopedia of Fantastic Victoriana" - an essential research tome and the most I have ever shelled out on a single book). It's available in a very attractive paperback and a more affordable ebook from Amazon.
Other writing projects I've been playing with include my first screenplay (an adaptation of John Buchan's wonderful novella "No Man's Land") and an entertaining but incredibly coarse Western novel that will have to be published under a pseudonym if it ever sees the light of day. I've also been toying with another Scottish tale, this time set on a hunting estate at the end of the nineteenth century. A big inspiration for this one has been Richard Connell's great short story "The Most Dangerous Game" and, of course, the classic RKO adaptation.
I probably won't post anything here for another year or so... I'll still be writing, just very slowly.
Posted by HLM Proops at 05:14 No comments:

"The Great Absolute" featured on Freebooksy


The Great Absolute has been out on Kindle for a few months now and has gathered a handful of very nice reviews. It's recently been available to download for free as a special promotion and has been downloaded over a thousand times. It's gained new readers in America, Canada, Germany, the United Kingdom, Spain, Italy, Japan and India!

The book was also featured on Freebooksy who hand-pick all the books featured on their website (so I must be doing something right). To celebrate this, they gave me this lovely digital badge.

If you hurry, you might be able to download the book for free before the special offer ends (don't worry if you're too late, the book is only 77p). Click here to be taken to the Amazon store.

I hate editing. It's brutally difficult, painfully dull and utterly soul-destroying.
I recently decided to go back to the first novel I wrote, The Great Absolute. I knew it needed a lot of work before it was ready to be set loose on the world but it was only when I started re-reading the weighty manuscript that I realised quite what I had let myself in for.
Don't get me wrong, I'm hugely proud of this book and I am really looking forward to getting it out there on Kindle. The problem is, the current draft of the novel is a bit of a mess. It has been over four years since I last tinkered with it and it's fascinating to see how the book suffers terribly from "First Novel Syndrome". It's funny when it should be serious. Slow where it should move fast. Worst of all, it's hugely over-written and spends far too much time telling the reader what is going on rather than just showing them. Needless to say, I've got my work cut out for me over the next few weeks as I whip this unruly beast into shape.
English folk customs play a huge role in the novel and for that reason I think it would be great to launch the book on Mayday. It remains to be seen whether I'll actually manage to hit this frankly ludicrous self-imposed deadline. Given that Strange Cases: The Adventures of Edmund Forrester arrived fifteen months later than I had hoped, I wouldn't hold your breath. In the meantime, here's a teaser poster I put together this weekend. 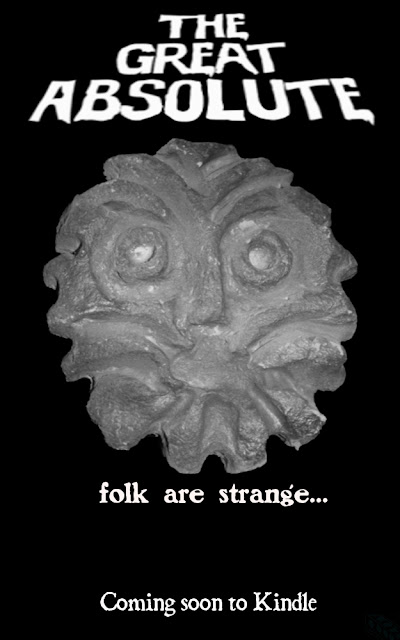 "The Sound of Shiant" goes viral!


It's been a really exciting week. On Friday 1st February, "The Sound of Shiant" and "Strange Cases: The Adventures of Edmund Forrester" were made available for a free promotional download on Amazon Kindle. I've done this sort of promotion before and they've been fairly successful. I've normally seen 200-300 downloads over the course of the promotion and a slight bump in sales when the promotion comes to an end.
"Strange Cases" did pretty well... 188 downloads from Amazon.com and 139 downloads from Amazon.co.uk. Add in the handful of downloads from other countries and the total was a pretty respectable 335. At its height of success, the collection reached number three in the free kindle short story charts. Not bad going for a book with no reviews at present.
I'm not quite sure what I did but "The Sound of Shiant" went nuts. By the afternoon of Saturday 2nd, the book was sitting at the top spot in the Amazon.co.uk free kindle fantasy chart, a position it held until Tuesday afternoon. It also reached third place in the free kindle action and adventure chart. Downloads from Amazon.com totalled 782 but the downloads really went crazy from Amazon.co.uk... 2,314. Add in the downloads from other countries and the total was a jaw-dropping 3,112!
What does this mean? Well... nothing, really. The book has enjoyed a bit of success and will hopefully get a few more positive reviews from those kind enough to take the time to post them. If I'm really lucky the sales in the coming weeks will benefit from a boost from all the publicity. I doubt any big name publishers are going to be coming up my driveway with a wheelbarrow full of money in the near future.
Of course, I'd be lying if I said I wasn't thrilled to bits with these numbers. I'm also kind of terrified by the sudden spike in popularity. Still, this is what it's all about, eh? I didn't start writing with the aim of making a lot of money (that's never going to happen when I only make 23 pence per paid download)... I write because I want to entertain people. As of this week I've got thousands of new readers, I just hope the novel will entertain them.
Posted by HLM Proops at 13:11 No comments:

After numerous delays, rewrites, edits and a few months worth of truly bitchin' writer's block, "Strange Cases: The Adventures of Edmund Forrester" is finally available on Amazon kindle. 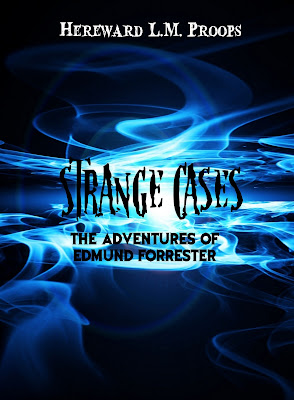 Shudder with terror as Forrester finds himself up against a toxic alien slime in "Pwdre Ser"!

Tremble with excitement when Forrester finds an unusual ally in "The Terror of London"!

Learn more about Edmund Forrester's unusual journey to America in "The Broken Man"!

Literally shit yourself with fear as Forrester faces his most monstrous foe yet in "The Snallygaster"!

"Strange Cases" also features a lovely little introduction to the Forrester stories by the inimitable Pat Black, author of "Suckerpunch" and "Snarl".

UK customers - click here to get your copy for a laughable 77p!

The Sound of Shiant - print edition

It's been a criminally long time since I've updated here. I've spent the past month working away on a kindle update of The Sound of Shiant - nothing major, just sorting out a few spelling mistakes and grammatical errors which slipped through the net the first time round. Those good souls who have already purchased the kindle edition will be able to download a free update very soon.

The ebook update ties in very nicely with the forthcoming print edition of The Sound of Shiant. The book features this fantastic cover by Chris Cowdrill and will shortly be available to buy from Amazon and Lulu. 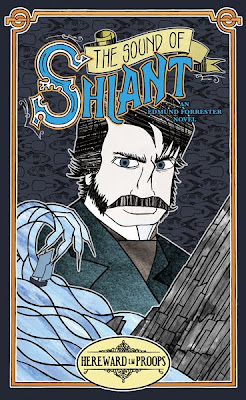 I'll post an update and a link to the book when it becomes available. In the meantime, you can check out Chris Cowdrill's other wonderful works of art here.

Finally, if you are wondering what happened to the Forrester short story collection Strange Cases, don't panic! I am aiming to release the kindle book in the next few months. I could give all sorts of explanations as to the book's delay but none of them are particularly interesting...
Posted by HLM Proops at 06:34 1 comment:

The Sound of Shiant - Out Now!

The Sound of Shiant, the first novel-length story featuring gruff Victorian detective Edmund Forrester is now available on Amazon's Kindle store. To celebrate its release I tinkered around with some video-editing software and made this little trailer.
Buy your copy here!
Posted by HLM Proops at 04:11 No comments: